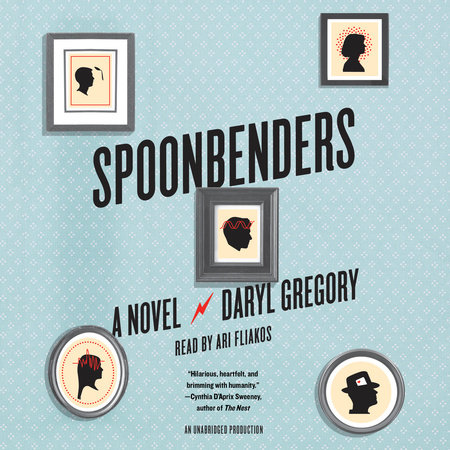 Spoonbenders is about: a family of performing psychics, the Chicago mob, secret government agencies, show business, and enough familial dysfunction to give Oedipus a run for his money. At a little over 400 pages, Spoonbenders at times does not feel voluminous enough to contain its five narrators and multiple plot threads—you’re constantly on your guard, waiting for Daryl Gregory to trip up, radically short-change a major character or drop a plotline. And yes, maybe on further examination there are arguments to be made concerning the level of development characters receive or the amount of time given to certain plotlines, but watching the third act of Spoonbenders, the overwhelming feeling is one of, well, astonishment. Gregory’s denouement comes together with all the skill of a (yes, let me indulge myself here) high-wire act, FBI agents, mobsters, and grief issues all converging together in a way that is nothing

Is this all pretty gushy? Yeah, it is. But Spoonbenders was a good, fun book written with a great deal of skill, and while it didn’t quite the emotional devastation of the The Paper Menagerie, as someone who figures herself in the writing business as well, I can respect skill.

Spoonbenders, like many good things in my life, came into my life courtesy of public radio aka NPR’s 2017 book concierge (thank you NPR, please support your local radio station) and like many of the titles I’ve discovered via NPR, it proven a delightful read. Despite the amount of ground it covers, the book’s premise is fairly simple: once upon the time, there was a family of psychics. In the 70s, the Amazing Telemachus Family had nearly had it all—fame, fortune, McDonald’s sponsorships and limited edition trading cards, etc.

Except, it turns out, they didn’t. On the cusp of stardom, the Amazing Telemachuses were instead humiliated, “debunked” by the Astonishing Archibald on national television despite their actual psychic skills. Now, roughly twenty years later, disillusionment and the death of their mother Maureen has left the Telemachuses in a sorry state indeed: Irene is a thirty-one-year-old single mother, Frankie is a debt-ridden construction worker involved in a goji berry pyramid scheme, and Buddy is an adult man who lives in his dad’s basement and occasionally forgets to put on pants. Teddy Telemachus is too old and cardsharp to let life knock him down, but he’s still a seventy-two-year-old widower with an extremely strained relationship to his children. And then there’s Matty Telemachus, Irene’s son and budding astral projector, a fourteen-year-old who knows just enough about the family business to be tantalized but not enough to be cautious. It’s a fairly wide age range we’ve got here, and with each character serving as narrator, the themes are similarly wide-ranging: online dating in 1995, adolescent fumblings with lust and adulthood, FBI agents interested in psychic spies as national defense, accidentally owing 50k to the mob…again, it’s a very broad book, and getting into the particulars would spoil a lot of the fun.

What grounds everything together, though, is the strength of Gregory’s five narrators. Despite their supernatural abilities, the Telemachuses’ main problems are primarily mundane, the type of things not helped much by astral projection or the ability to be a human polygraph. Halfway through the book, there’s a reference to X-men, but this is no Xavier’s School for Gifted Youngster: quite frankly, most of the powers presented here are pretty useless, if not actively problematic. How do you sustain a relationship, after all, when you can sense every white lie uttered, to say nothing of the larger ones? What does being able to see the future mean when your ability to change it is so very limited? Does mild telekinesis really help much when all your life decisions are terrible? None of the characters in Spoonbenders are perfect—sometimes they’re downright awful to each other—but somehow Gregory manages to produce sympathy for even characters I’m primed to dislike. Spending so much of our time with each of these characters helps, letting us learn their vulnerabilities and worldviews in a naturally intimate manner. Balancing five protagonists and their backstories is no easy task, but it’s one Gregory manages to make look almost effortless.

In short: read Spoonbenders. Maybe it won’t change your life, but it’s a smart, well-crafted book with beautifully developed characters, one of those rare books that leave you both hungry for a sequel and glad without one.

View all posts by cynthiaqzhang